In news that is unlikely to come as a surprise to many of us, The Times reported on 20 April 2020 that “Men dominate jobs offering highest pay”. Information obtained from HMRC by means of FOI requests showed that men were almost five times as likely as women to earn more than £150 000 p.a. and more than eight times as likely to earn over £1 000 000 p.a. The article went on to report that the number of women in the £150 000 + category had risen faster than that of men in the previous five years. Lest that be seen as a reason for optimism, the same newspaper had reported two days previously that the “Gender pay gap opens up quickly after graduation” with male graduates out-earning women by 10% within a year of graduation. The percentage gap was largest among those with the highest skills (£26 000: £24 000). As the Times graphic posted below shows, women outnumber men in every pay category under £27 000, while men outnumber women in every pay category above this figure. The article went on to report that BAME graduates “were as likely as white university-leavers to be earning at least £36,000, but were more likely to be unemployed”. 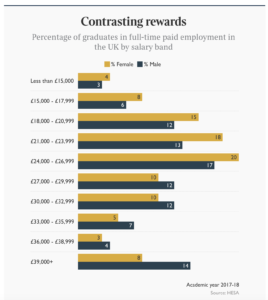