The July 2020 print issue of Counsel magazine carries an article by Lesley Thomas QC (until recently joint head of Garden Court chambers, now also a professor of law at Gresham College) subtitled “Let’s talk about race. Forget the guilt and take action. Bias is implicit and often unconscious. It takes great courage to change the system. It benefits us all.” Thomas discusses his own experiences of race discrimination and draws attention to the woeful statistics on racial diversity at the Bar, suggesting that things may actually be getting worse. He discusses the Lammy Review on the treatment of BAME people in the criminal justice system and the race discrimination which is endemic in the immigration system before turning his attention to the Bar, referring to the BSB’s Diversity at the Bar 2019 statistics and lamenting the lack of black judges in the High Court and beyond. Thomas calls for “a proper and honest discussion about racism” among barristers and about the need to understand that racism is not confined to individuals who are consciously motivated by racial dislike, making the point that “colour-blindness” at the bar “does not work in a system where everyone at the top of judicial power is white, everyone in the ‘best’ chambers is white, and the two ‘best’ universities in the country have a lack of black entrants” and .stating that “We cannot just take race off the table. It needs to be discussed”. Thomas goes on to argue that  white barristers “need to understand that questioning the way things currently are is not about them being attacked, shamed, accused or judged… We should forget the guilt and take action”. He finishes with a call for colleagues to support ‘Black Lives Matter’.

The 2019 diversity statistics show that BAME practitioners continue to be under-represented at the higher levels of the Bar, accounting for 13.6% of the profession but only 8.1% of QCs. The following chart, taken from the BSB’s report, makes the point quite clearly: 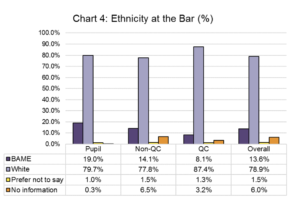 The statistics are more problematic again when ethnicity is disaggregated, with only 3.2% of practitioners being Black/ Black British (as against 3.7% of the population): 3.4% of pupils, 3.4% of non QCs and 1.1% of QCs. In March 2018 the BSB published Heads Above the Parapet: How can we improve Race Equality at the Bar? in which it disclosed that BAME BPTC graduates were significantly less likely to obtain pupillage than their white peers when qualifications were held constant. The figures are stark, as illustrated by the chart from the report: 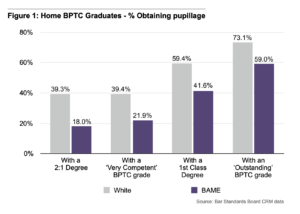 The report also showed significant differences in the practices of white and BAME barristers. Whereas 17% of white practitioners were employed, 3% were sole practitioners and  76% were tenants in chambers, the figures for BAME practitioners were 21%, 8% and 64% respectively. It made reference to a 2013 survey in which 25% of BAME barristers reported personal experiences of bullying, discrimination or harassment in the previous two years, by comparison with 12% of white barristers, and to the 2016 Women at the Bar survey in which 54.2% and 48% of BAME women barristers reported having experienced, respectively, discrimination and harassment at the Bar, by comparison with 42.5% and 38.4% of white women barristers respectively.