The European Committee of Social Rights, which is responsible for compliance with the European Social Charter, announced on 29 June 2020 that it had found that 14 of the 15 countries which apply the Charter’s collective complaints procedure were in breach of rights to equal pay and equal opportunities at work. Article 20 of the Charter guarantees “the right to equal opportunities and equal treatment in matters of employment and occupation without discrimination on the grounds of sex”. Of the countries subject to a complaint by the University Women of Europe (Belgium, Bulgaria, Croatia, Cyprus, the Czech Republic, Finland, France, Greece, Ireland, Italy, the Netherlands, Norway, Portugal, Sweden and Slovenia) only Sweden was not found to be in breach. All of the countries examined had satisfactory legislation but most were found to be in breach because of insufficient progress made in reducing the gender pay gap, some also because of an absence of pay transparency in the labour market, ineffective legal remedies and/or inadequate resourcing and powers of national gender equality bodies. The report also found that women continued to be under-represented in decision-making positions in the private sector. The findings are in separate decisions relating to each of the countries subject to the complaint though much of the evidence relied upon was more general in nature. The ETUC, for example, pointed out that only two countries of the countries (France and Norway) achieved the European Commission’s proposed 40% objective for the representation of women on Boards and that even in these cases the data the data related only to the ‘largest listed companies’, the threshold not having been met across companies as a whole.

There is no decision on the UK’s compliance with the right to equal pay because it has not signed up to the collective mechanism which permits complaints by the social partners and other non-governmental organisations. It is sobering however to bear in mind the fact that the UK’s gender pay gap is significantly worse than that in most EU states and also in the EU as a whole, as is illustrated by the illustration below which is taken from a Eurostat report published in February 2020.

The figures above relate to the unadjusted gender pay gap, defined as the difference between the average gross hourly earnings of men and women expressed as a percentage of the average gross hourly earnings of men, calculated only for enterprises with 10 or more employees. More alarming still is the relative position in the UK when public and private sector organisations are disaggregated: in 2018 the UK had the highest unadjusted gender pay gap in the EU for public sector employees. 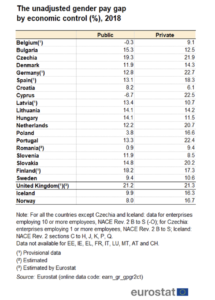 The ECSR’s press release “acknowledges that the gender pay gap is no longer solely or even primarily a result of discrimination as such” but “arises mainly from differences in the so-called ‘average characteristics’ of women and men in the labour market” which in turn “result from many factors, such as horizontal segregation, where there is the concentration of one sex in certain economic activities (sectoral gender segregation) or the concentration of one sex in certain occupations (occupational gender segregation), as well as vertical segregation, notably the fact that too few women occupy the better paid senior and decision-making positions within companies”. The Committee called on states to “assess the impact of the policy measures adopted in tackling gender segregation in employment, improving women’s participation in a wider range of jobs and occupations. In addition, having pointed out the significance of vertical segregation to the gender pay gap, it referred to the positive obligations on states to take steps to increase  women in decision-making positions within private companies, which may “entail introduction of binding legislative measures to ensure equal access to management boards of companies, including by setting specific quotas or targets in both public and private sector that will promote parity”.